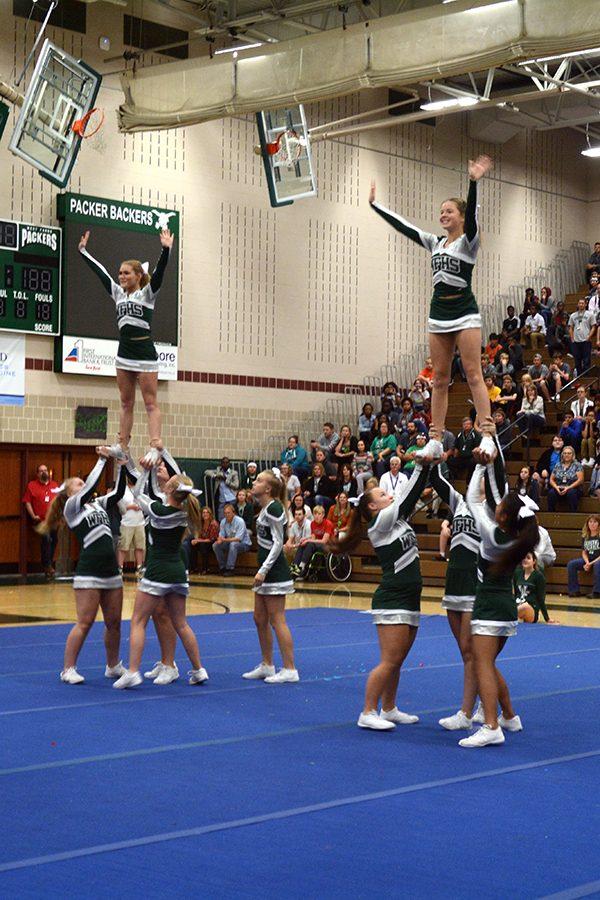 West Fargo High School’s varsity cheer team won the Regional Cheer Competition in Milwaukee, Wis. on December 3rd. This means they now have the chance to pursue the national title. This is the team’s fifth consecutive year going to the national competition held in Orlando, Fla. They are returning in hopes of  maintaining their winning streak in February.

Head coach Jennifer Stewart, a teacher at Cheney Middle School, has high hopes for the team and the results of the competition.

“It’s always an honor to represent North Dakota.  We actually seem to run into quite a few people there that have ties to ND as well!” she said. “Ultimately, I want the girls to look back on their high school cheerleading career and think of it with fond memories of their teammates, coaches, competitions, games, and the places we have traveled to.”

Sophomore Brianna Kalbakdalen, the cheer captain, plans to enjoy the experience of going to nationals with her friends and teammates.

“That’s all that we can do… To have fun, and spend time with my team, and do our best,” Kalbakdalen said. “I just want to do best for my team and I want to be a good role model and do what’s best for them.”

Senior Chloe Bates thinks winning nationals would be a great way to end her season.

Both Kalbakdalen and Bates are part of the varsity cheer team along with the school’s flying team. They are a small group of four cheerleaders that do many stunts and tricks like haves, extensions, and heel stretches. They will compete alongside the cheer team in Orlando.

Assistant coach Alicia Bates, is excited to go back to nationals. In the five year streak, she has been on the team for three years and will be coaching for her second year.

“It’s a big accomplishment to be coming from a team that won, and coaching that team that’s winning,” Alicia said. “A lot of schools don’t even have cheer teams, so for us to even be able to have an opportunity to go to nationals where people don’t even know where we’re from.”

West Fargo’s cheerleading team has represented the school, city, and state for four years already. They hope to reclaim their title as the winners of the competition.