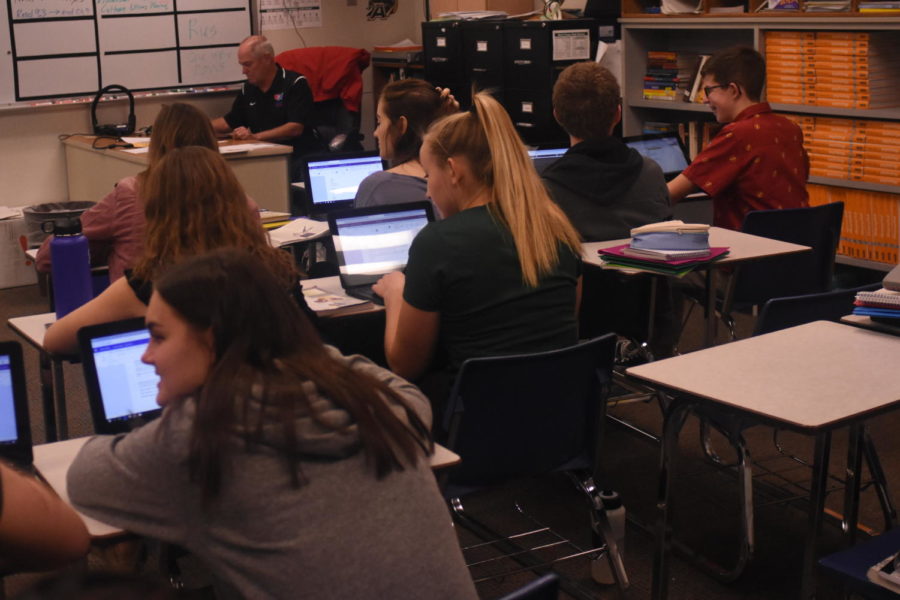 A group of students in Eric Zwingel's class using the 1:1 devices. Photo by Ragen Diemer

The new 1:1 program, a program designed to give every student at West Fargo High School a personal device for the school year, is being tested out at West Fargo High School. Two teachers from each department has been testing out rather iPads or laptops since the beginning of the year. The trials are being done to decide on the device that will be assigned to students, with the options being rather iPads or PC laptops.

The 1:1 computer policy started at Cheney Middle School for the 2015-16 school year. They tested the program at Cheney primarily because the school has a smaller population of students, according to Director of Technology Edward Mitchell. Mitchell is excited to see the program in work as well as for the changes that come with it.

“It truly is a whole organization initiative and ultimately, the most change to fundamental workflows comes not to the technology group but to the other stakeholders, including students, who support the teaching and learning efforts of the district,” Mitchell said. “A 1:1 device implementation simply cannot be viewed as a technology initiative.”

Science teachers Tarah Dahl and Sara Forness are trading devices routinely so that they both have chances to teach with both device types. Dahl says that she enjoys the uniformity and special features the iPads can bring. Dahl has said that she does worry about the logistics and cost-effectiveness of the program, however, including maintenance and internet abilities.

“Going 1:1, giving each student a device, can be very beneficial,” Dahl said. “Especially to those students who currently don’t have any device at home for whatever reason because it will sort of level the playing ground for those students as they’re supposed to be able to access their homework online but they don’t have a computer at home”

Social Studies teacher Matthew Slocomb joined the 1:1 committee to learn more about the program and make a more in-depth analysis of the program, as he says it is still very early in the program’s steps.

“I fundamentally believe that teaching is not about a device or about a book or something so you can have the best teacher in the world or the best learning experience in the world without using a computer at all, so it’s just a vehicle in which you can learn in a technologically based way,” Slocomb said. “So if it goes through or doesn’t go through I think we have the staff that can best deliver quality instruction to our students.”

Dahl said that she likes the uniformity and different abilities with the iPads that you can not do with the PCs, such as locking students into certain programs and activities.

“I like the fact that I can monitor devices and that I can lock students into a program,” Dahl said. “Like the other day when I was able to lock all of my students into a Kahoot program and then I could also see who got the answers right and wrong which I couldn’t do before.”

The 1:1 program, no matter the device, will allow every student to have the ability to access the internet at school and at home. This lets students have a more equal opportunity to get their work done and go beyond what they could before.

“A truly successful 1:1 implementation that transforms the student experience is one in which all buy in to the capabilities of the deployed resources and work to maximize their impact,” Mitchell said.