Tenold gets sworn into the Air Force 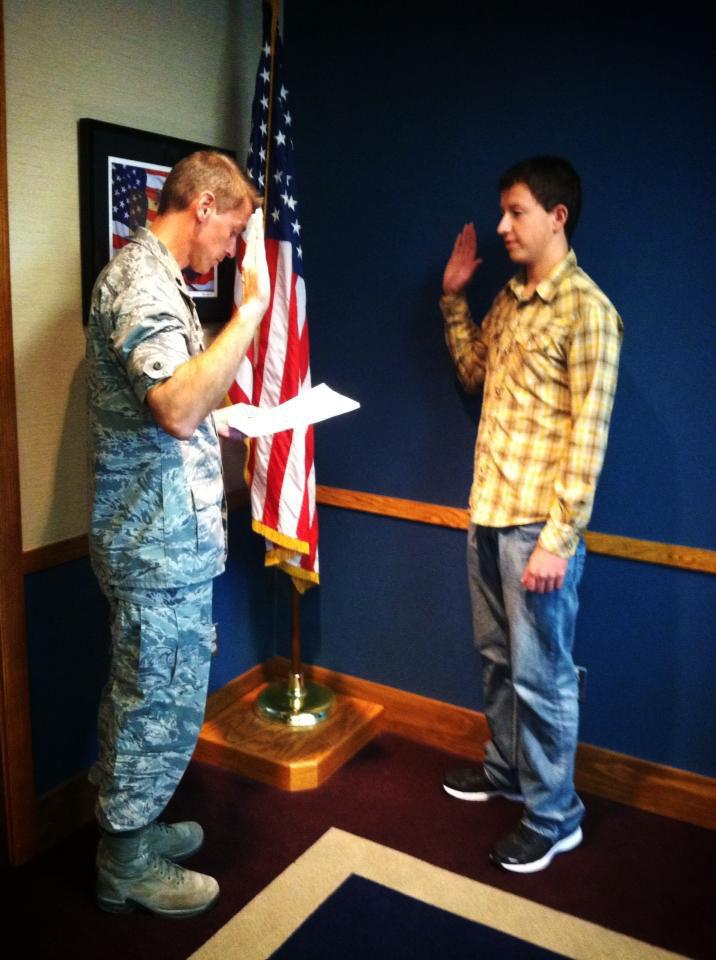 On the morning of Sept. 11th, senior Zachery Tenold looked at the American flag at the corner of the North Dakota Air Guard meeting room, and he realizes the significance of what he was about to do. He was preparing to be sworn into the Air Force.

Tenold thought it was an interesting opportunity to be sworn into the Air Force on Sept. 11th because it is a symbolic day in America’s history. As he entered the room to take the oath, he was cautious because he did not want to mess up, but also thankful he was officially accepted into the Air Guard.

“[It was] a relief, because it was a tough process to get in [they] were picky as far as your mental and physical condition and everything so they really have a lot of different speculations,” Tenold said. “Being it is so hard to get in, you know, it’s nice to know you’re finally locked in.”

Tenold’s future job is a Cyberfusion analyst, where he will look at terrorist’s communications. Even though Tenold is unsure of what he wants to accomplish in the Guard, he intends to stay for the eight years he is obligated to serve. Tenold will attend basic training for three months and immediately after that, he will go to Advanced Individual Training for six months, where they will teach him how to do his job.

“[The] way they have it set up is you pick a field that you want to go into, so I said that I wanted to go into Intel, and there aren’t always a whole lot of jobs open in the Air Guard just because there’s a low turnover,” Tenold said. “So they had basically one option they had opened for me which was a fusion analyst but there were two different branches in that job so I picked one idea.”

Similarly, Gary Lipsey, a former Technical Sergeant in the Air Force, chose to join the Air Force at a young age, but for different reasons than Tenold.

“[I] joined because I needed to take care of my family and needed money for school,” Lipsey said. “[I] resigned because I missed home and needed a different lifestyle change,”

Lipsey said basic training was challenging. Next summer, Tenold will have his experience at basic training and learn how to dress in a uniform, fold clothes, shine shoes and boots, march, and a learn a great deal about physical activities.

“[It] teaches you how to live like a soldier,” Lipsey said.

Tenold believes the Air Force is a positive choice for college. He said he is looking forward to it because the Air Force will give him time to get an education.

“If you’re going into college, being in the Air Force is a nice thing to have, being able to stay out of debt and also just helping your country,” he said.

Tenold believes that people his age should join because it is a good way to start your future in the workforce and people have an idea of what they might want to do when they are older.

“It’s a good way to start your future in the workforce because it gives you an idea of the different things out there and give you any idea of what you want to do in your future,” Tenold said.

Tenold said he was inspired by his family and he had thought about joining for a long time. Tenold’s dad and his grandpa were enlisted and Tenold would like to keep the military statute going in the family. Tenold’s dad, Arlen Tenold, was in the Army National Guard for 10 years and his Grandpa was drafted into War World II.  One of the reasons Arlen is glad Zach joined the Air Force is he will be able to see the world in a different perspective.

“It’s a great opportunity to see different parts of the world that you’ve never seen any other way,” Arlen Tenold said.