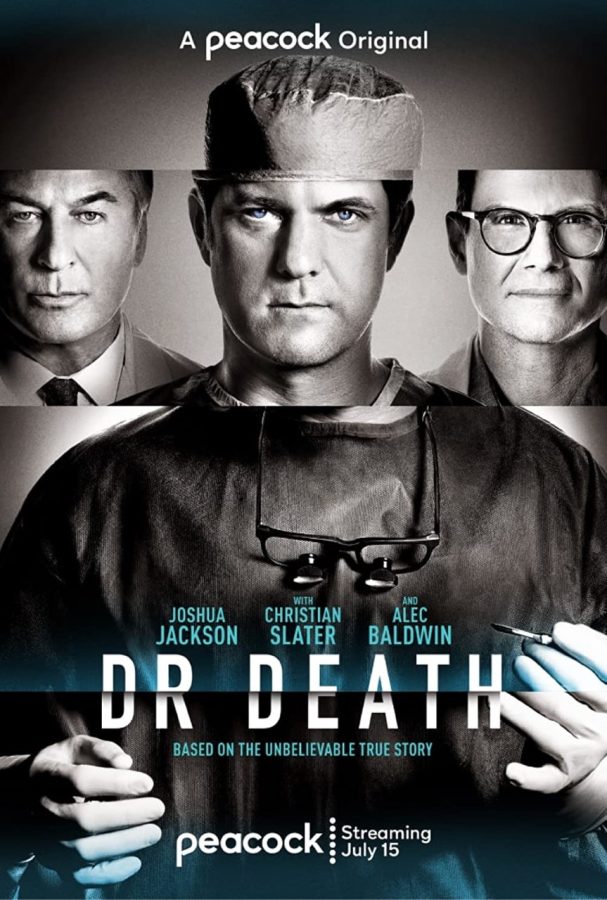 Pretentious, egotistical, “self-sufficing”, arrogant, two faced, intolerant, backstabbing, fraud, unintelligent, and manipulative: These are just some words I would use to describe Dr. Christopher Duntsch in the new crime drama Dr. Death.

Dr. Death is a 2021 Peacock TV original series based on the true story of Dallas, Texas neurosurgeon Dr. Christopher Duntsch, who was accused of gross malpractice and indicted for five counts of aggravated assault with a deadly weapon and convicted of one count of harming an elderly person.

Compared to doctors and nurses I’ve come across in my life, I have never witnessed a more unsettling vibe than the one I’ve seen on this show. Take Dr. Kirby, a doctor that worked with Dr. Duntsch at Baylor Medical Center for example: He is an upbeat optimistic neurosurgeon just trying to help everyone out. This contrasts dramatically to the show’s portrayal of Dr. Duntsch who puts on this less-than-appealing persona, that is completely see through. A five-year-old could see through his lack of rapport. Like when Dr. Duntsch is talking to Earl Burke, Dorothy Burke’s husband, he was less reasurring than he was cocky. Talking about how he had been doing this for years and about his PhD’s and all that jazz. But he failed to ever show any kind of sympathy or empathy for the man.

The show opens with a more than eerie deep stare into a camera given by Dr. Duntsch, played by Joshua Jackson. From the environment, it looks to be that he is in prison. There was also an overlay of victims Dunstch had operated on testifying during his trial. Now, this opening didn’t throw me off in the slightest. If anything, it made me more intrigued to continue watching it. It did it’s intended purpose: hooked me. Then the complications started. This show had a big problem with seamlessly switching back and forth to different years. Too seamlessly to the point where I found myself rewinding looking for the words that clarified when the scene was happening. Some never were clarified.

In terms of casting, we have Joshua Jackson. Jackson is a 43 year-old, Canadian-American male actor. He’s most known for his role as Charlie Conway, the captain of District 5/The Ducks in the iconic Mighty Ducks trilogy. Other’s may know him for his role as Pacey Witter, Dawson Leary’s best friend in Dawson’s Creek. Jackson has acted amongst numerous eye-catching names such as Reese Witherspoon, James Vander Beek, Katie Holmes, Emilio Estevez, and more.  Jackson’s performance in this series was amazing. It’s different from his regular quick-witted roles. He portrayed Dunstch just the was he was meant to be perceived: disgusting.

Second is Alec Baldwin. He may be a more recognizable name due to the recent tragedy on the set of Rust. The 63-year-old American male actor is known contemporarily his role as Boss Baby in The Boss Baby: Family Business, but you may have also seen him in Mike Meyers’ Cat in the Hat as Larry Quinn. Baldwin has also been affiliated with many actors as well as some of the Saturday Night Live (SNL) cast. I have to say I was disappointed with Baldwin’s performance. It was boring and unappealing. If his character had been cut from the show completely, I don’t think I would have ever had a problem with it. It was very bland. There isn’t much to say about his poor attempt at this role.

Lastly, we have Christian Slater. Slater is a 52-year-old American male actor. Slater is mostly known for his iconic role as J.D. in Heathers. He also plays Mr. Robot in Mr. Robot. Slater has been around many actors such as Rami Malek, Winona Ryder, John Travolta, and Marisa Tomei.  I was quite surprised when I realized Slater was playing an upbeat, not as quick-witted, and resolute character. Though the appearances don’t match up for the role of Dunstch, Slater would have probably fit in that role perfectly. From his roles in Pump Up the Volume and Heathers, his well known knave character has somehow dissipated into a less demeaning, rather more annoying and demanding character. I really wanted to love his role, but his execution was mundane.

In all, Dr. Death is an intense mess. From the confusing timeline down to the reconstructive surgery, it was hard to make sense of. If I was being biased, I would say this show was great due to the casting. But, since this is a review, I’ll have to put that aside. This show had a lot of potential. In fact, the story and overall idea was amazing. It was the way it was executed that really ruined it, for me.

Try comparing it to The People v. O.J. Simpson: American Crime Story. In this Netflix original, the entire show was slick. It started with a hook, and had a pleasant and understandable timeline. The acting was also phenomenal. There was no crazy switch ups or anything. It was intense but with context. Just a smooth series. But with Dr. Death, the series was almost choppy. And the acting was okay. I feel like the way that Baldwin presented his role as Dr. Henderson, was more than disappointing. Especially from him. He was almost emotionless. Just bland. I honestly think this series would have done better had it been a documentary.

I also think this show had a problem with the directing style. The People v. O.J. Simpson was partly directed by Ryan Murphy alongside Brad Fulchuk. These directors are amazing for countless reasons including their productions of American Horror Story, The Politician, and Glee. While Dr. Death has directors that I hadn’t really heard of. Maggie Kiley being one of them. And, sure, it’s good to venture out from your usual M. Night Shamalan or Steven Spielberg, but it’s hard. It’s liking changing from Times New Roman to Comic Sans in the middle of a serious essay.

In summation, this series definitely had potential. But of course, the standards were not reached. I would love to see these three work again in another film. Maybe something more action packed as this series was less than exciting.  Fans of Mindhunter, The O.J. Simpson Trial, or even Clarice might take a liking to this one.