Rogue One: A Redemption Story 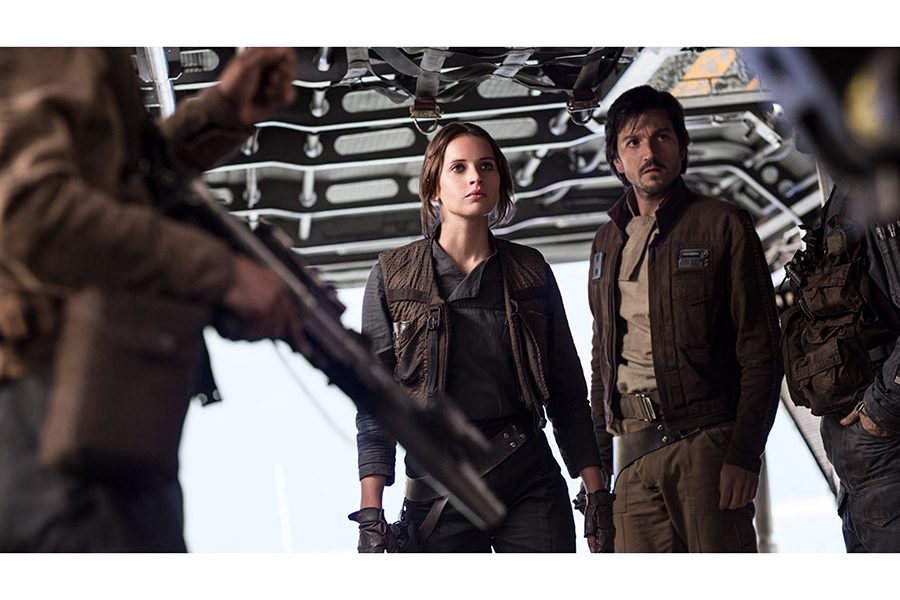 Felicity Jones as Jyn Erso and Diego Luna as Cassian Andor in the film “Rogue One: A Star Wars Story.” (Lucasfilm Ltd.)

Another year another Star Wars movie, this time with a twist. “Rogue One: A Star Wars Story,” or simply “Rogue One,” is the franchise’s first spinoff movie that is not part of the mainstream movies. It has had a successful opening weekend with $357.1 million dollars in the box office with a $200 million budget.

“Rogue One” is the story of a former prisoner of the Empire Jyn Erso (Felicity Jones), who meets up with a rebel captain named Cassian Andor (Diego Luna), Andor is his witty and compassionate security droid that used to work for the Empire (Alan Tudyk), a former Imperial pilot (Riz Ahmed), a blind monk named Chirrut Imwe (Donnie Yen) who relies heavily on a belief of the force and the monk’s best friend and guardian, who is a weapons expert and thrill seeker name Baze Malbus (Jiang Wen). Together, this band of six go on a mission to steal the plans for the Death Star on a new planet that is introduced in this movie.

This movie is pleasing to fans as it coincides with the timeline and facts of the other movies, along with referencing the other movies and aspects of Star Wars entertainment. The film even adds explanations to many big plot holes and mysteries of the original trilogy.

For example, one of the biggest plot holes and questions formerly regarding “A New Hope” was why somebody would put a ventilation shaft on the Death Star that was perfectly placed to allow for the destruction of such a weapon. It turns out that this vent was intentionally placed by Erso’s father (Mads Mikkelson) who is forced to work for the Empire, thus creating the iconic weakness.

This movie is filled with many cinematic experiences that combine the look, style, and movement of the old Star Wars movies with the new style, technology, effects, and possibilities of modern day filmmaking. This makes for a visibly beautiful movie with a memorable music score arranged by Michael Giacchino and classic Star Wars themes by John Williams.

There are also many classic Star Wars characters from other films. They vary from a CGI remaking of Grand Moff Tarkin, to a very intimidating and downright villainous Darth Vader, and even a brief cameo of C3PO and R2D2. There are also a variety of new favorite characters to love including K2SO, the Imperial turned rebel droid that loves to be sarcastic, but is sad to never get a gun.

The villain is also a new type of antagonist. Director Orson Krennic (Ben Mendelsohn) is a villain who is sly, strategic and intimidating while also being angry, demanding and moody. This combination is similar to Adam Driver’s take on Kylo Ren in The Force Awakens, but Krennic is not as whiny and dramatic as Kylo Ren.

This is a movie that is acceptable to be the beginning of a new branch of the classic and highly adored Star Wars saga. Gareth Edwards, the director of this film, created a high quality film that not only stands up as its own, but fits almost perfectly into a legendary series. “Rogue One: A Star Wars Story” was a successful start to what we can only hope to be more spinoffs of pinnacle moments in the Star Wars franchise and timeline.