Little Shop of Horrors branches out across the city 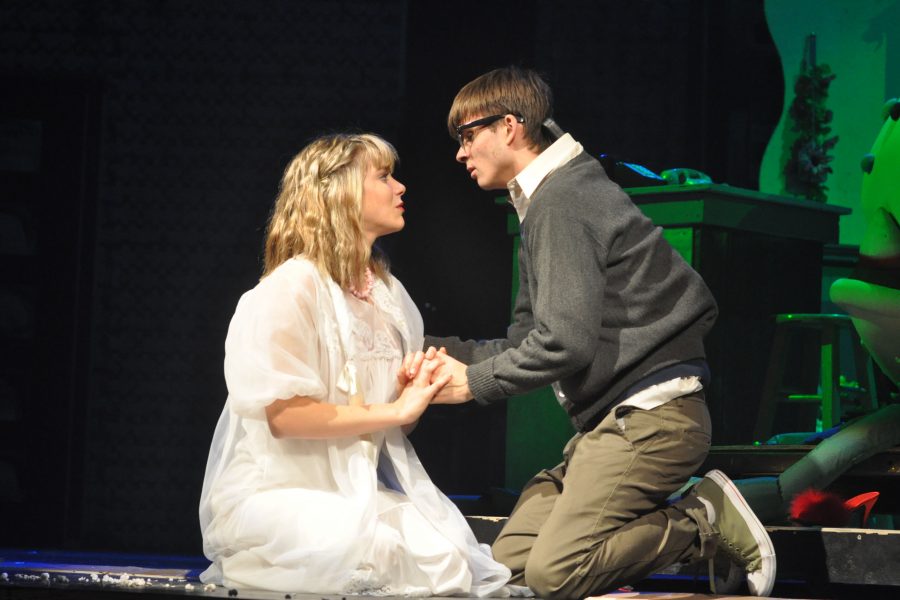 Moorhead High School has surpassed their reputation from last year’s musical, “Tarzan,” with a show that. This year, MHS performed “Little Shop of Horrors” by Alan Menken and Howard Ashman. Little Shop was first performed in 1982 off-off-Broadway and then moved off-Broadway later that year. It is now one of the longest-running Off-Broadway shows in history.

The musical is about a lowly, orphaned man named Seymour Krelborn who works in an unsuccessful flower shop. Seymour purchases an interesting plant that when put on display, provides attention for the shop. He names it Audrey II, after the girl Seymour works with and is secretly in love with. The plant, however, starts dying, and Seymour discovers that the only thing the plant will feed on is human blood

Eventually Seymour finds out the true intentions of Audrey II and has to decide between the plant and his success, or his health and the health of others.

MHS staged this show in November and included 45 students in the cast, technical crew, and pit orchestra.

Theater director Rebecca Meyer-Larson said she was proud of this group of students. “Little Shop of Horrors” is her favorite show and this is her second time directing it, she said.

“I think there’s something intoxicating about young performers committed to creating good art,” Meyer-Larson said. “I think we’re drawn to that. There’s something really lovely about it. I’d take good high school theatre over good professional theatre any day.”

Solwold enjoyed acting with and having small talk with the plant puppet.

“We’ve got this awesome plant, actually four phases of this awesome plant from Philadelphia, and I think the best part of it is literally kind of having to pinch yourself every time you work with this plant,” Solwold said. “Getting to work with an inanimate object that just has so much character… That’s happened the last week that I‘ve gotten to work with these plants and talk with and banter with it. That’s a total blast for me.”

Senior Jason Daniels, the voice of Audrey II, says that playing the puppets while not actually being on stage is a different experience from anything he has done before.

“It’s so different, because when you’re singing it feels like you’re on stage, but it’s like you have to be so much more perfect with your vocals, because if anything changes from any different night then the puppet’s going to be off,” Daniels said. “It’s so fun, because two of my best friends are actually in the puppet and working with it is fun because we get to figure out what fun little physical things we get to do.”

“Whatever their attracted to in the show, whether it is the music, or the story, or the absurdity of it all with the blood and the gore,” Pankow said. “I think it’s just sort of appealing. It has a populus appeal. I think it’s worth doing over and over again.”